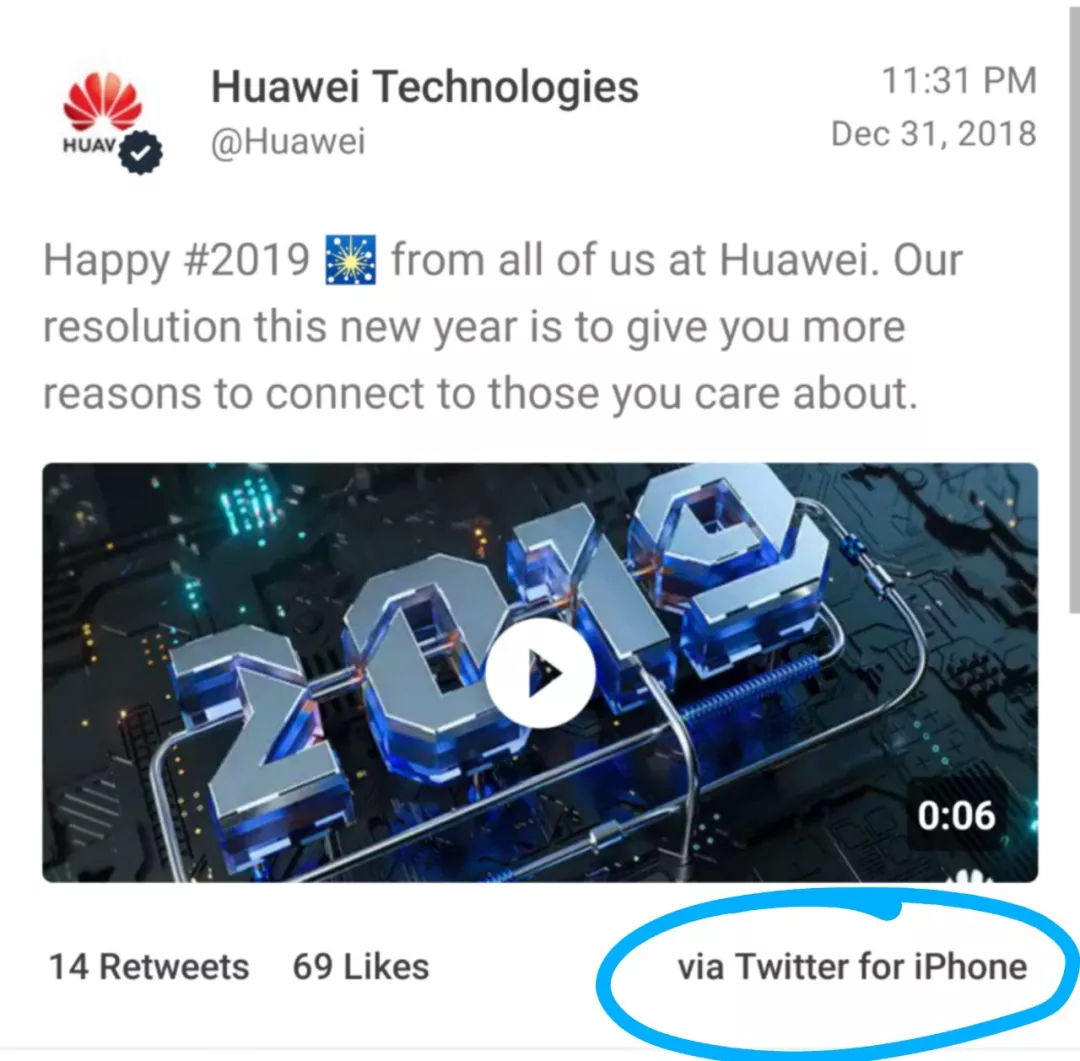 The Chinese smartphone maker becomes the object of ridicule after posting a New Year's tweet with an iPhone.

While Huawei deals with security concerns with its phones with different world governments, it is now the object of jokes and ridicule over posting a New Year's tweet on its official Twitter account using what appears to be an iPhone.

He had become an object of ridicule among the other teachers.

She rarely spoke her mind out of fear of being ridiculed.

Huawei has been called out by netizens for tweeting a New Year message through Apple's iPhone Twitter app. This was through its official Huawei Technologies Twitter account. The post was subsequently taken down and re-posted without the mention of it being tweeted via an iPhone. Nonetheless, netizens continued sharing pictures of the initial post sparking conversation.

The tech world was shaken when Huawei surpassed Apple to become the second largest smartphone vendor globally last year. The smartphone giant later rubbed salt to the wound by handing out Huawei power banks to Apple fans who were queuing up for iPhones overnight.

However, a recent blunder by Huawei has left an unforgivable mark in Internet history. A seemingly harmless tweet was posted on Huawei's official Twitter page yesterday, 1 January, wishing the public a Happy New Year. But eagle-eyed netizens spotted a tiny mistake... the tweet was sent from an iPhone.

rub salt into the wound

Losing was bad enough. Watching them receiving the trophy just rubbed salt into the wound. 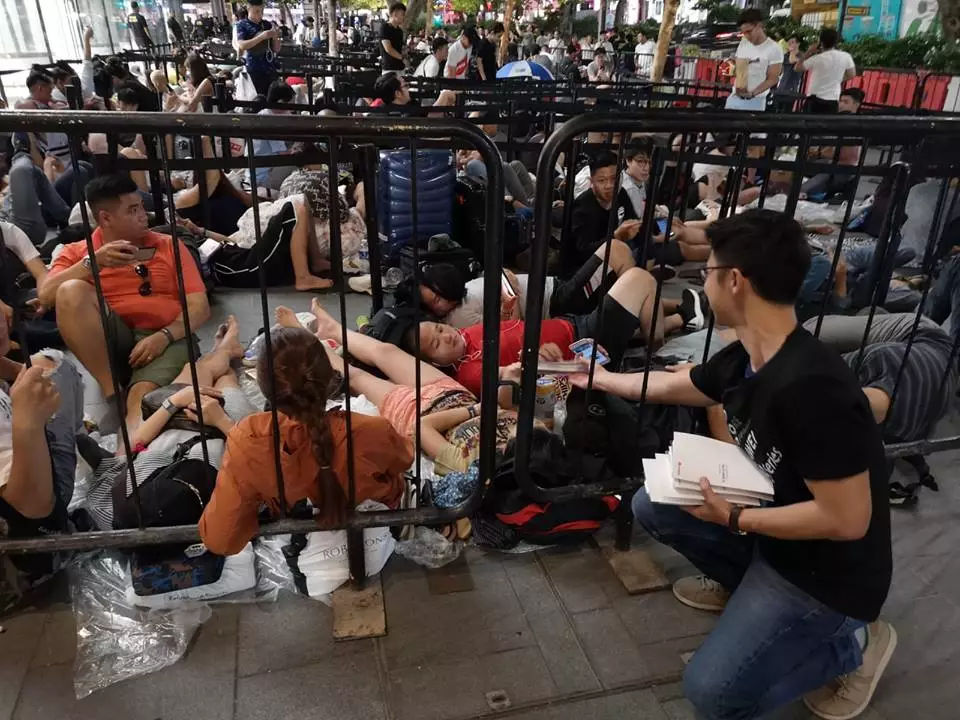 A last-minute blunder cost them the match.

形容词，表示“目光锐利的; 观察敏锐的”，英文解释为“If you describe someone as eagle-eyed, you mean that they watch things very carefully and seem to notice everything.”，举个🌰：

Huawei lost some serious credibility after publishing a New Year's Eve post on Twitter using an iPhone. The post, which was made by the tech company's official Twitter account at 11.31pm on December 31, wished everyone a happy new year and gave their resolution for 2019, “to give you more reasons to connect to those you care about.”

除了表示“决议，正式决定”（a formal decision or statement agreed on by a group of people, especially after a vote），此处表示“决心，决定”，英文解释为“a promise to yourself to do something”，举个🌰：

He made a resolution to work harder at school in 2019.

Directly under the video in the right-hand corner read ‘via Twitter for iPhone,’ which is an automated message that is displayed whenever posting content through the social media platform's iOS app.

The post was deleted shortly afterward and republished without the iPhone message display. Unfortunately for the telecommunications giant, a screenshot of the status was captured, causing the Internet to blow up.

Huawei sent out new year wishes on Twitter by tweeting “Happy #2019 🎆 from all of us at Huawei. Our resolution this new year is to give you more reasons to connect to those you care about.” However, Huawei goofed up by sending this tweet from an iPhone which made it a subject of trolls and memes.

The restaurant totally goofed up our reservations.

He's been goofing off at school.

作为名词，原意指“（斯堪的纳维亚地区传说中的）山精，巨人，侏儒”（an imaginary, either very large or very small creature in traditional Scandinavian stories, that has magical powers and lives in mountains or caves）；

此处用来指我们在互联网上所谓的“喷子，键盘侠”（在因特网上为吸引别人关注或捣乱）故意留下令人生气的帖子，英文解释为“someone who leaves an intentionally annoying message on the internet, in order to get attention or cause trouble”。

As always, this was spotted by popular tech YouTuber Marques Brownlee who's also known as MKBHD. As soon as Huawei was caught tweeting from an iPhone, it deleted the tweet and tweeted the same message again, but not from an iPhone.

The main Huawei account is not the only channel on Twitter that used an iPhone to send out tweets to its followers wishing them well in the coming year – @HuaweiMalaysia also looks to have tweeted theirs from an iPhone as well.

Samsung did it too:

Huawei is not alone in making an iPhone mixup. Just last month MKBHD discovered an older tweet from the Samsung Twitter account that did the same thing in November. 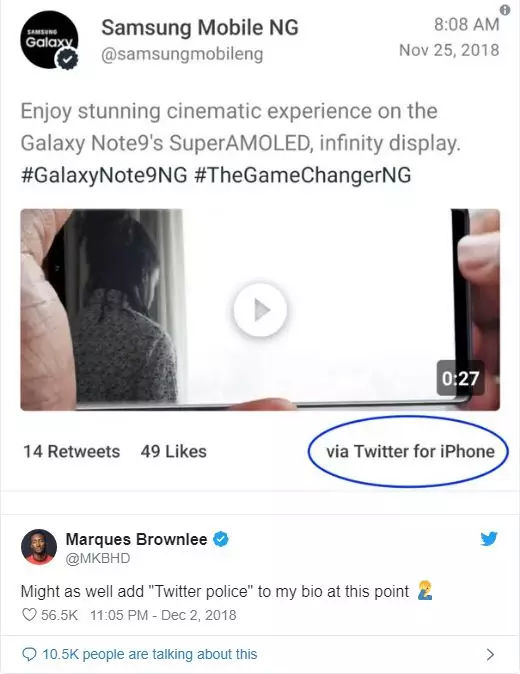