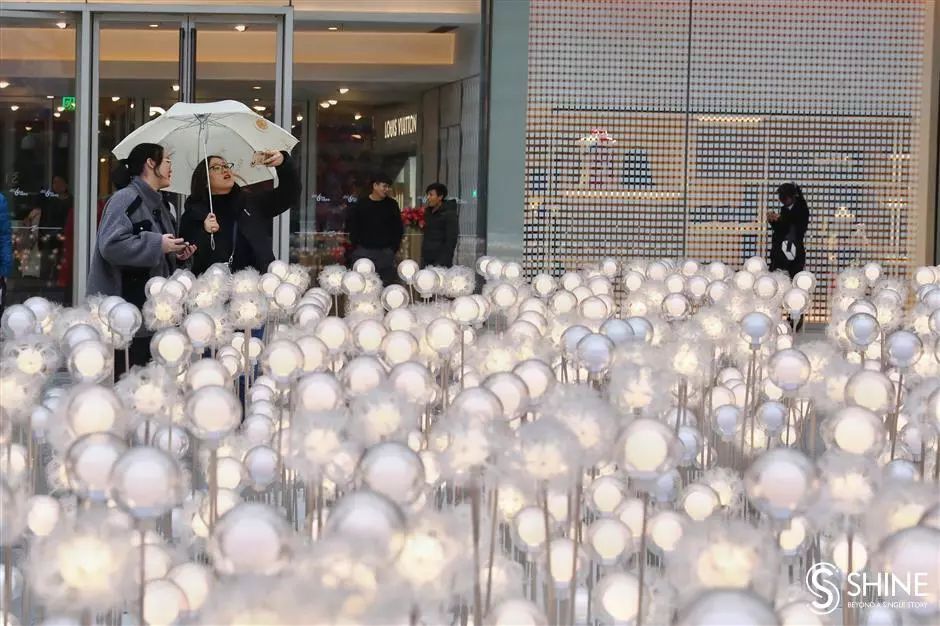 Visitors take selfies amid 20,000 dandelion bulbs at the newly unveiled plaza in front of the Grand Gateway 66 shopping mall.

A new plaza has opened to the public at the Xujiahui commercial hub, marking the near-completion of a major facelift to the popular downtown shopping complex.

Illuminated by nearly 20,000 dandelion bulbs, the Culture and Art Plaza in front of the Grand Gateway 66 shopping mall attracted a number of visitors to take photos on Christmas Day.

The plaza, said to be the largest open-air square in the Xujiahui area, replaced the former iconic 39 steps during a renovation last year.

The bulbs, resembling large pieces of dandelion, kept flickering day and night. Outdoor exhibitions and performances will be held in the plaza in future.

The facelift to the Xujiahui commercial zone began in 2017 after online shopping had led to declining sales since 2009. The commercial zone was established in 1992, one of eight in Shanghai.

When the facelift is completed, the mall will feature 100 new brands, with over 40 percent international brands. The space for food and beverage and lifestyle outlets will be increased to 30 percent from 20 percent.

The nearby Shanghai No. 6 Department Store, another traditional shopping mall, will be the next to be renovated to retain customers while attracting younger consumers.

Opposite the new plaza, the initial phase of a skywalk is near completion to connect malls in Xujiahui.

Construction of the Xujiahui Skywalk is ongoing opposite the Culture and Art Plaza in front of the Grand Gateway 66 shopping mall.

Construction will start in 2020 on the next phase linking the Orient Shopping Center, Grand Gateway 66, Pacific Department Store and Xujiahui Center, which will become the tallest building in Puxi on its completion in 2023.

The main steel structure, bridge decks, drainage system and electric facilities have been finished. The wooden floors have been laid and most of the greenery planted.

Designed by French architect Jacques Ferrier, who designed the popular France Pavilion at the World Expo 2010, the skywalk will be an “urban public artwork” with practical functions.

LED lighting will feature different colors corresponding to the notes of popular Chinese folk song “Jasmine” and visitors will feel like the tune is flowing along with them when they walk at night.

An anti-corrosion material has been chosen for the ground of the skywalk and the structure is wrapped with over 150,000 pieces of stainless steel plates.

Some adjustments have been made to the original blueprint, including adding shelters from the sun and rain.

In several other projects already opened, the former three-star Xiya Hotel, built in 1995, has been redeveloped into the upmarket T20 complex.

The structure of the skywalk is wrapped with over 150,000 stainless steel plates.返回搜狐，查看更多